The Photographs of Home

The Photographs of Home is an all encompassing title used to cover all of the work produced (and being produced) as part of my PhD research.

The work is engaging with the notion of the photographic object as a form of memory prompt and construct of identity, exploring the changing meaning of photographs throughout our life course.  Focusing particularly on the role of photographs in aged care, the work is part of an ethnographic research project undertaken in partnership with an aged care facility in Brisbane, Australia.

The first iteration of the work juxtaposed existing images with newly created portraits, showing a quite literal role of the photograph to capture a moment in time and allow us, in its reading, to infer its passing.

The second iteration of the work will explore oral storytelling, working with the residents to use photo elicitation techniques to produce a rich life stories to accompany the images.

The images were first shown in a site specific exhibition held at the residential aged care facility so that all the residents could see the work.  From early afternoon, staff brought over residents from the residential, dementia and independent living areas and read aloud the captions and artist statement.  The residents featured in the exhibition also attended a night time opening with family, friends, aged care advocates and media. 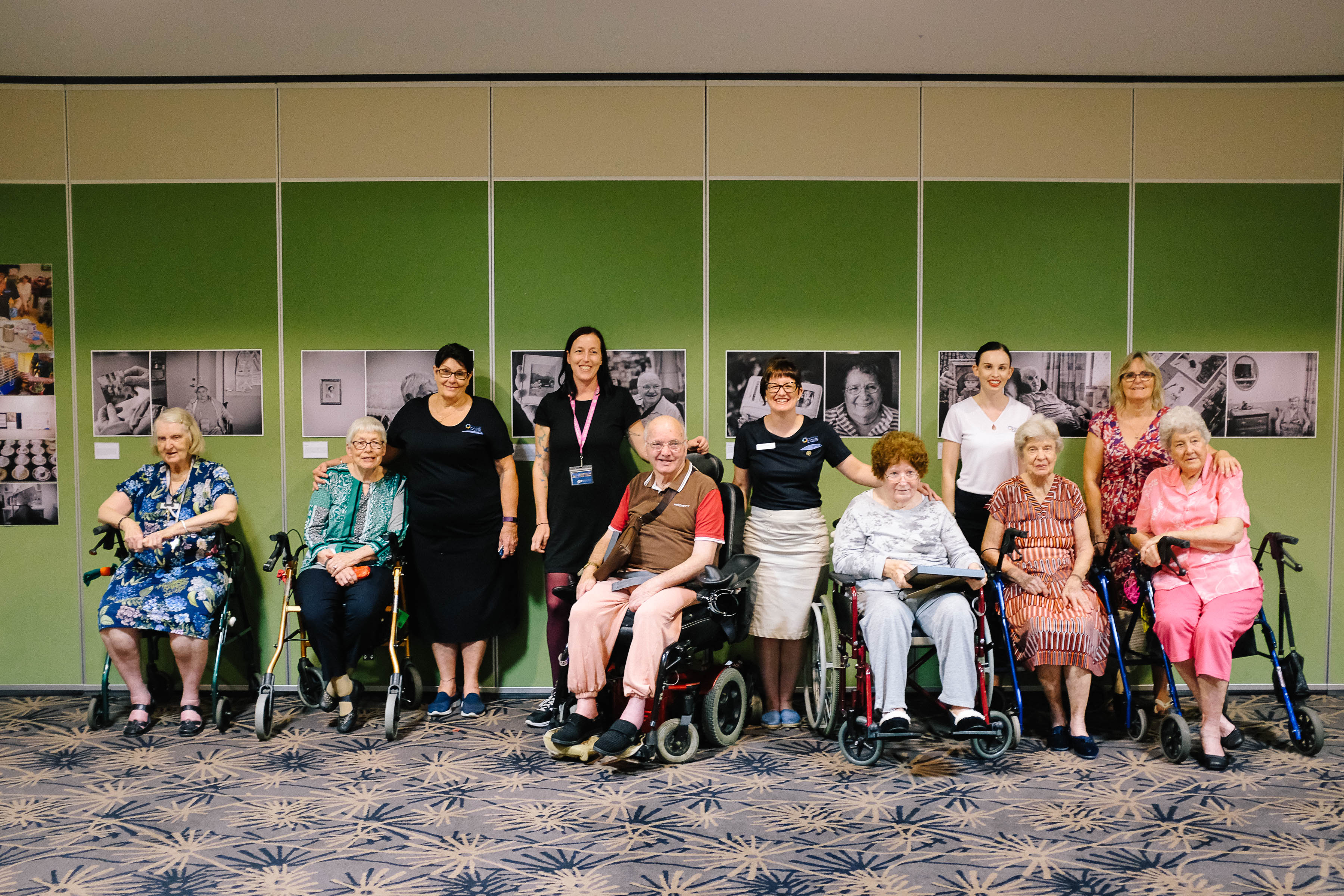 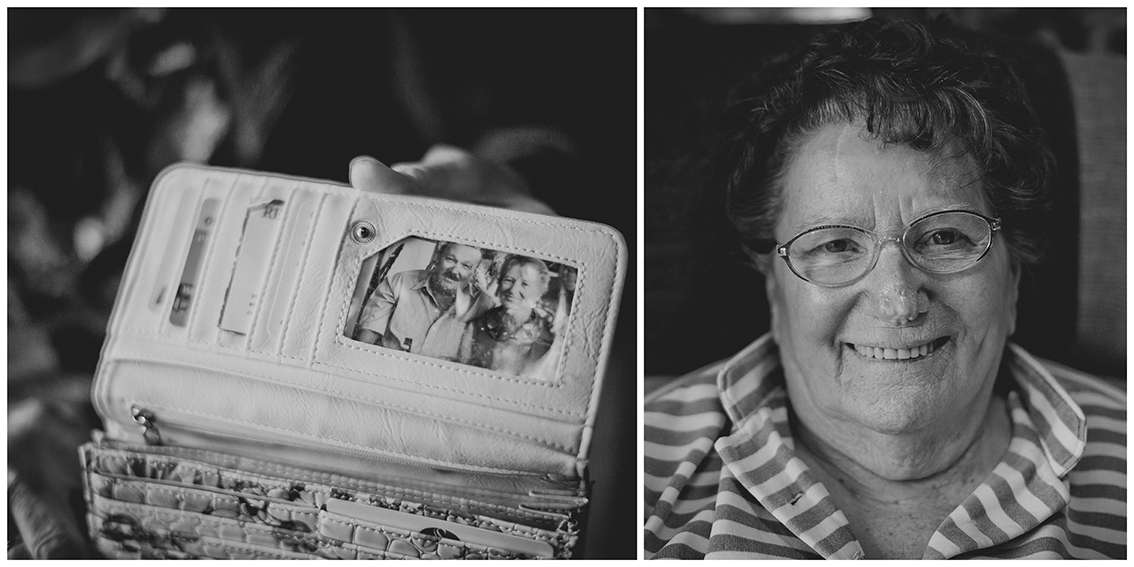 Whilst Christina’s prized photograph is a large and very striking studio portrait of her three children, on display and commented on by all who see it, this photograph remains close to her heart.  Her and Jacko, a blurry photograph intimately tucked into her purse where only she will regularly see it, reminding her of the great love of her life. 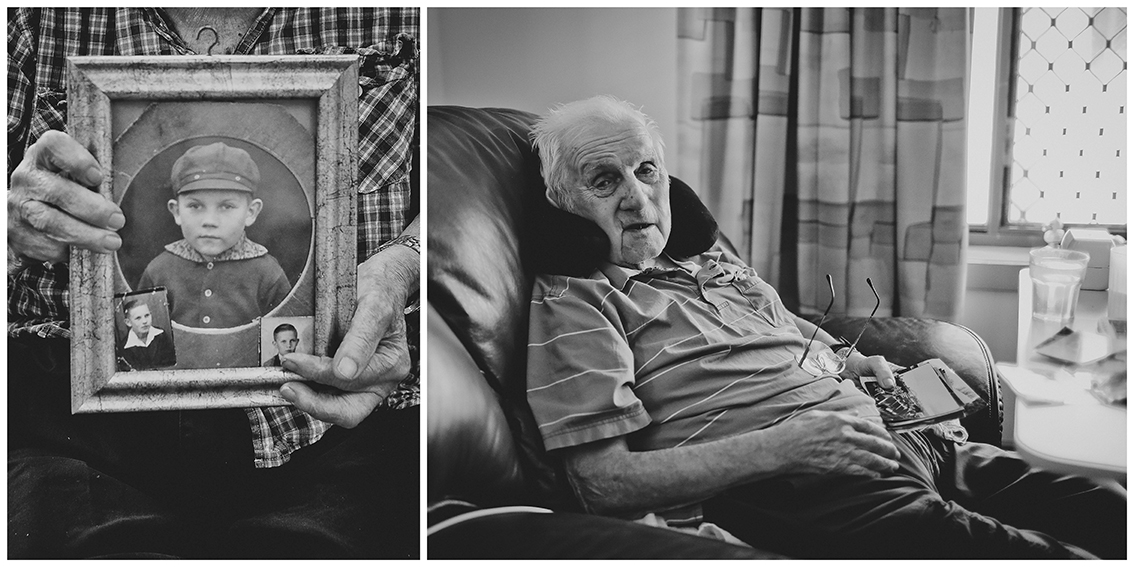 This is a photograph from when Joey was about five, in his home country of Poland from where he was later forced to flee.  It brought mixed feelings to him when he looked at it, but he liked how cheeky he was.  An amateur photographer, Joey valued his photographs more than anything.  In his big comfy chair, Joey looked at a massive stack of family photographs every single day, often falling asleep with his glasses and the stack of photographs dropped in his lap. 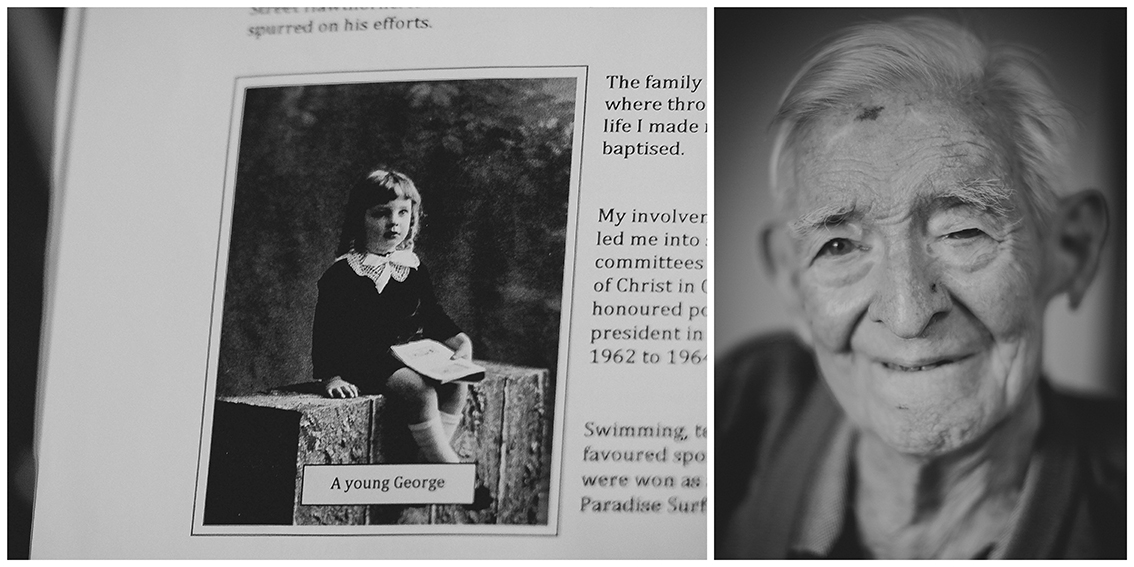 The photo of George is over 100 years old, he says it was taken in 1917 when he was just three.  Shutter speeds on cameras were a lot slower back then, so one had to sit very still for their portrait.  George laughed as he told the story, it was a freezing day and so he was shivering considerably.  This was taken moments after his mum yelled out “sit still and stop shivering George or you’ll ruin the picture”! 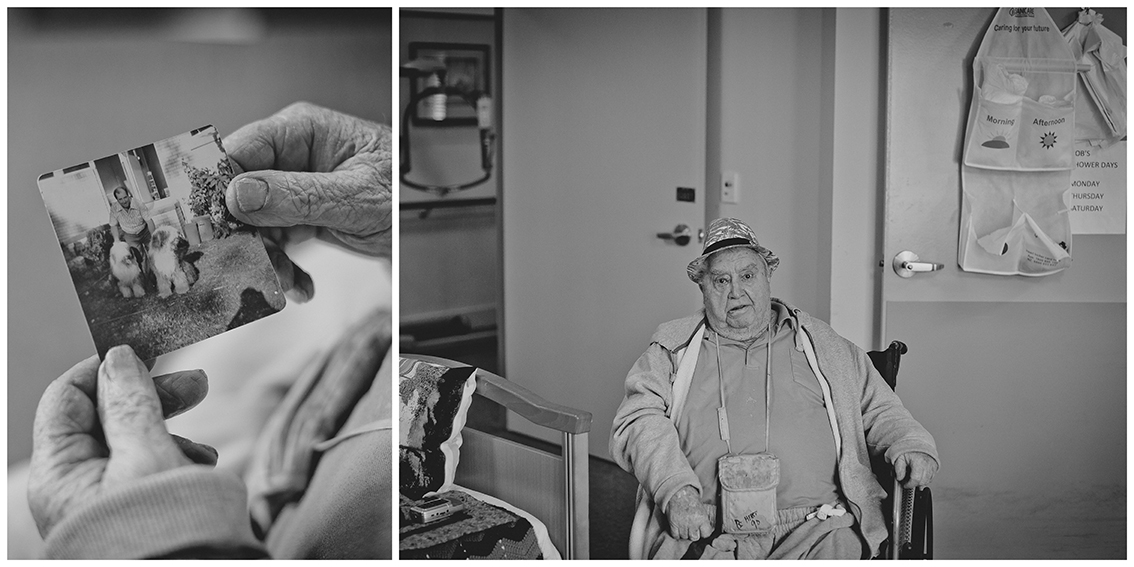 A devoted father and husband of over 60 years, the photo Bob loved to talk about most was a photo of him with his three daughters and wife, however one day he stumbled across this photograph in his room and smiled.  “That’s me with the two English Sheepdogs” he said.  He hadn’t thought about the dogs for a good many years but he enjoyed greatly the memories of them the photograph brought back. 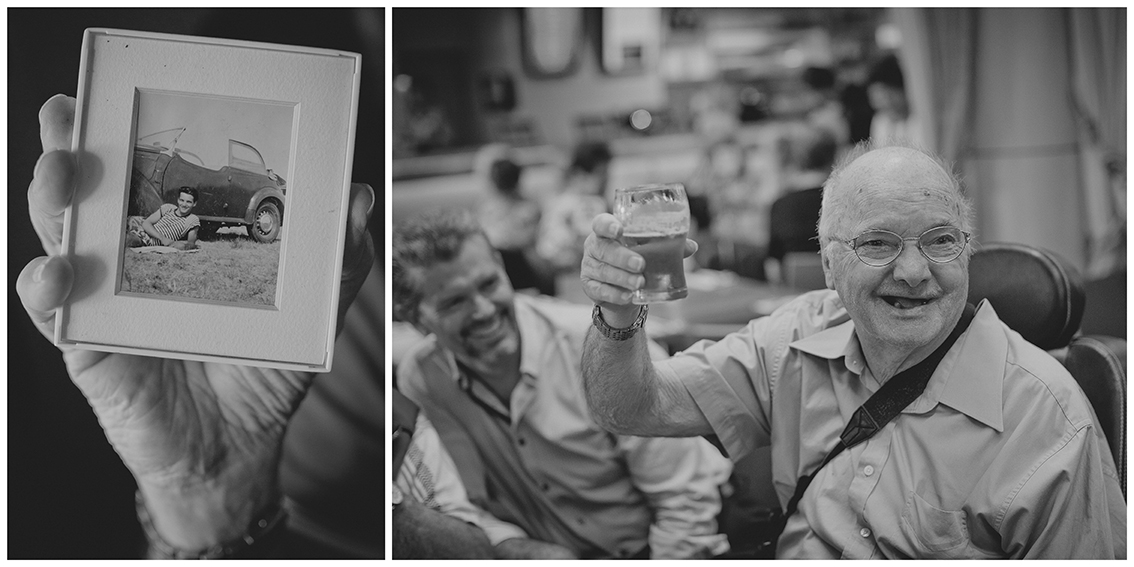 On the left, Brian is holding a photograph from his wedding day, very casually and very calmly lying in front of his car at the time.  His soon to be wife took the photograph as they enjoyed some time together before getting ready for the wedding.  Brian is just as calm and casual these days – always up for a chat and easily one of the most active residents at Moonah Park.  When the men of Moonah take an afternoon trip to the local pub and someone asks what he wants to drink, Brian never skips a beat “GOLD of course, always Gold”. 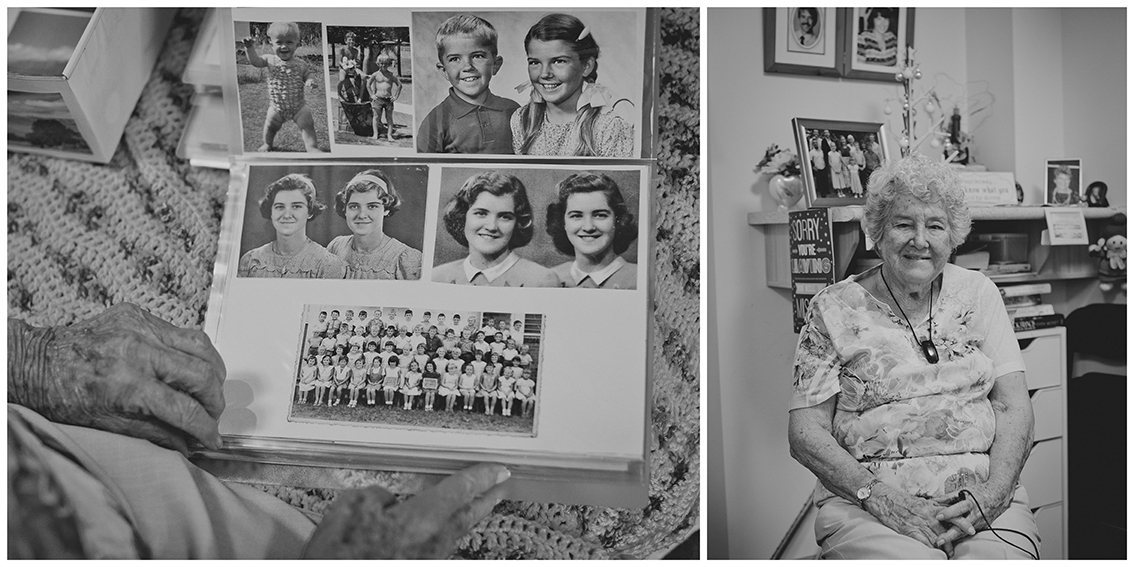 Identical twins, Joy’s father often said that she and Daphne were “immunised with a gramophone needle because they never stopped talking”.  Joy has spent her whole life talking to and giving to others but now she enjoys her downtime living in aged care where she can crochet and socialise and just enjoy time with her family.  “I said, just pack me up like I’m going on holidays”.  Joy took a few prized possessions into her room, ordered the rest to go to charity and is now the happiest and most relaxed she’s felt in years. 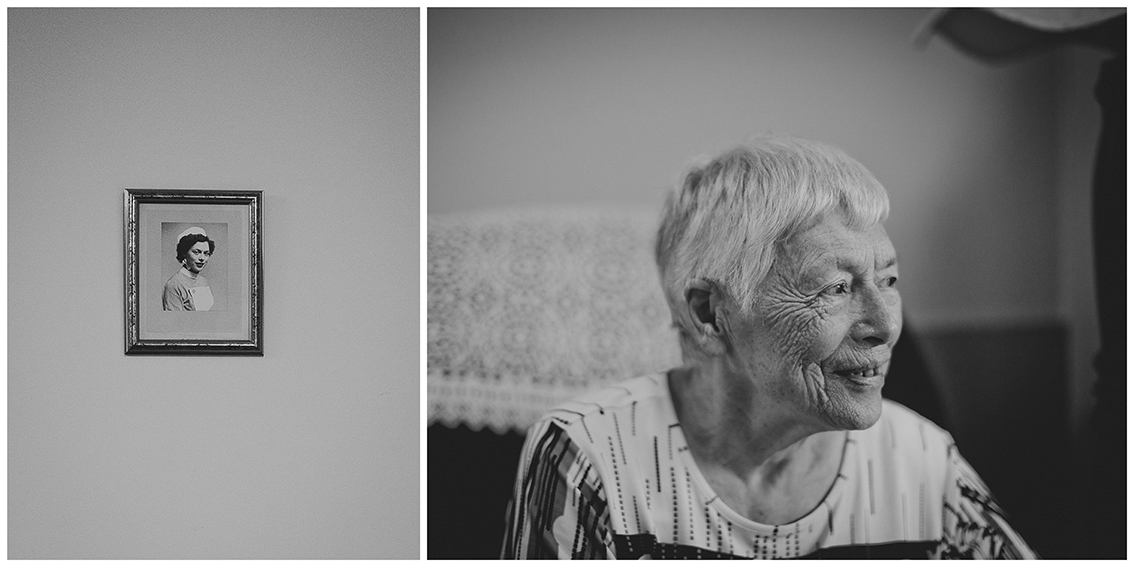 This portrait of Margaret was from her first day as a nurse in her homeland of Scotland, a career she enjoyed for a good many years.  The photograph currently sits behind her when she is in her comfy chair in her room, so she never really sees it. She prefers to look at the painting across from her chair, a black and silver painting of trees that can mean anything depending on her imagination that day. 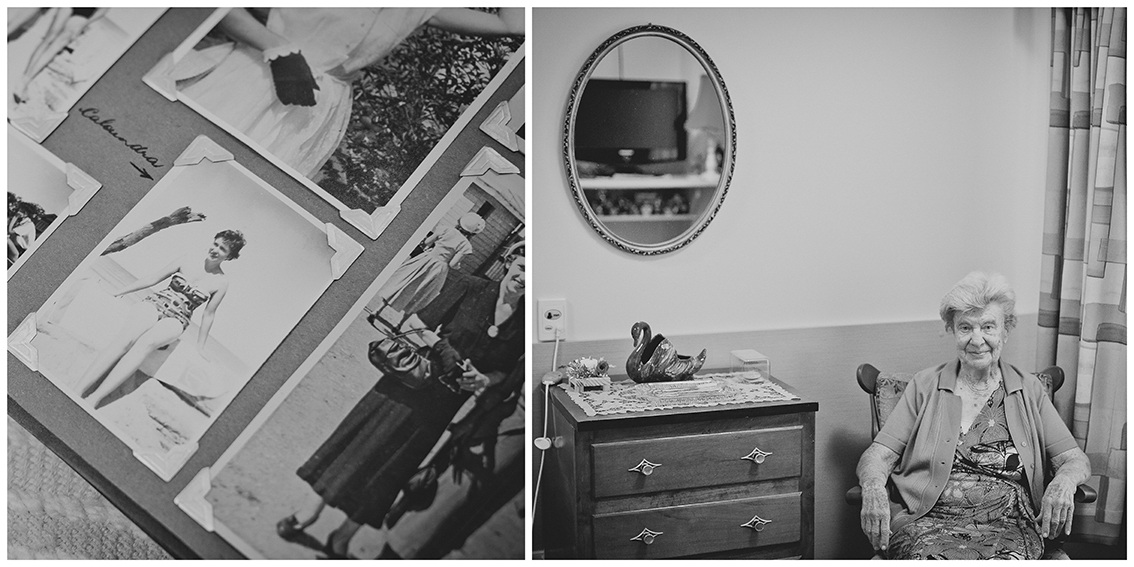 Meticulously named and dated, Marilyn’s album spans the early 1940s all the way up to the 1970s – through her travels, her work, her parents and cousin, as well as serving as a chronological documentation of various fashions at the time.  This image is a standout though.  “I really like that one.  I’d just been swimming, I was all wet, it was natural.  That’s what I like about it.  It’s a very natural photograph”.